Russell Allen Phillips, or Phil as his friends called him, was a B-24 pilot in the U.S. Army during World War 2. 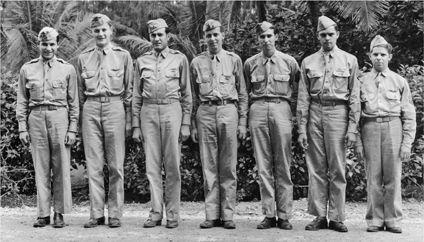 Phil is first from the left

The distinguishing characteristic about Phil was his height. Some of the men called him "Sandblaster" because, said one pilot, "his fanny was so close to the ground."[1]

You see, B-24s were built for pilots that matched an average height or even a little on the taller side.

Phil needed a cushion to get his feet to the pedals and his eyes over the control panel.

His story is told in Unbroken, a book I recently read about the incredible story of Olympian turned World War 2 POW Louies Zamperini who survived 40+ days at sea after his plane crashed, got captured by the Japanese and was moved from camp to camp until America won the war.

Louie's is a phenomenal story, but Phil's story is the focus of this post.

You see, Phil was not alone with his rogue modifications to the cockpit. And it was likely these adjustments that kept him and his crew alive for so long.

Fast-forward a few years after the end of the War, and the US Air Force was officially created in September 1947.

Not too long after, they had discovered a serious problem.

Their pilots kept crashing. They straight up could not control their planes.

The U.S. Air Force did what most large bureaucratic organizations do, they labeled these crashes as "incidents" or "accidents" and chocked it up to bad training.

But it wasn't until in the early 1950's did they wise-up and decide to look further into the issue.

In a recent 99 Percent Invisible episode titled "On Average" [2], they tell the whole story, which prompted this post because I was so fascinated by it.

"The high death rate in the Air Force was a mystery for many years, but after blaming the pilots and their training programs, the military finally realized that the cockpit itself was to blame, that it didn’t actually fit most pilots. At first, they assumed it was just too small and that the average man had grown since the 1920s, so in 1950, they asked researchers at Wright Air Force base in Ohio to calculate the new average."

One of those researchers was Harvard Graduate, Gilbert S. Daniels.

In his research measuring thousands of airmen on ten critical physical dimensions he came across a startling discovery: none of the pilots he measured was average on all ten dimensions.

Not a single one.

When he looked at just three dimensions, less than five percent were average.

Roman goes on to say a profound statement,

Daniels realized that by designing something for an average pilot, it was literally designed to fit nobody.

Needless to say, changes were made: adjustable seats, steering wheels, pedals, etc. And cockpits are very accommodating today (and much safer as a result).

I used this story in a recent presentation I did at the Hawaii Annual Code Challenge, talking about building things utilizing the Lean Framework to encourage developers to not build for the average.

And hopefully, they heed the advice. Although they will likely not be building software or hardware during the hackathon that could kill someone (God forbid), the citizens of the great State of Hawaii want them to build something useful that solves a real problem.

So here's to well-designed stuff, hackathons, and fun history lessons.

[2] Listen to the 99 percent invisible episode: On Average