Start a podcast they said. It would be easy, they said.

Podcasting can be a lot of work. So you better enjoy doing it. Luckily for me, thus far, I'm enjoying it quite a bit.

If you happen to like it as well, or just want to check it out, it would be awesome for you to Subscribe. Just click on the ALL CAPS link below...

So, in the first installment, I wrote about trends and stats in podcasting, why start a podcast in the first place, and how the concept of the show came together.

This article dives into the meat of the show, beginning with the interviews. After that, there's some notes on editing, the full gear list I've used to record and finally; steps it took to launch the podcast.

The Interviews: Inviting / Scheduling, Prepping, and Conducting a Good Interview

So, I had a premise for the show, an outline of topics and now I needed to figure out who to interview.

... And how to convince them to be on a brand new show with zero listeners.

So I made a list of potential guests, and just started with those people I knew.

When you know the person, the interview ends up being more natural, they're also more forgiving of you as the host as you figure things out and start finding your groove.

I think I'm about 15 interviews in and I have found a good rhythm, but I also know I have a ton to learn.

Even though I was inviting my friends at first, I still wanted to be professional, and show them that I'd thought through things.

So I created an email template I use to invite people.

This has been a great tool because it's a repeatable process. I always lead in the email with a few lines of a personal note and then reference "see more detail below". That way, it achieves both the personal touch, and professional tone.

How do I prep for an interview?

Typically, I'll spend 1 - 3 hours researching a guest prior to having them on the show.

This is my basic approach:

Contrary to conventional wisdom or common sense, I didn't actually do a ton of thinking initially about how to conduct an interview.

I guess I primarily relied on the fact that it was just a conversation and if I make the guest feel welcome, important, and comfortable it will work out.

I think part of the trick is to be yourself, and as a host you can imprint your own personality onto the conversation, but not be overbearing or underprepared.

The interview starts way before with the research preparation.

I do follow a basic script but I keep it pretty generic. It's meant to be a guideline.

While prepping to do interviews, I had to figure out how to record them.

I came across this tool that I've used for a lot of my podcasts called zencastr. 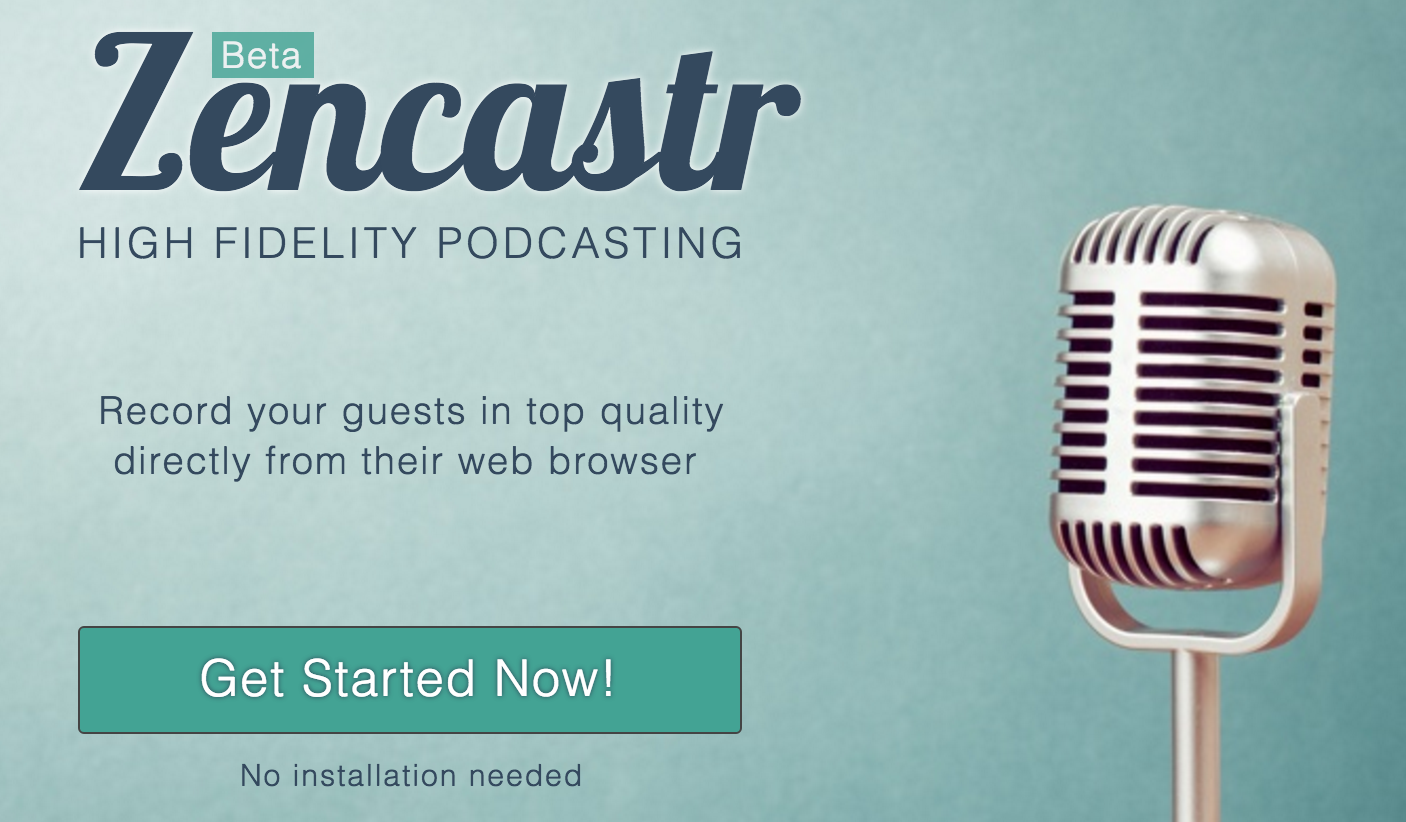 It's been awesome because I could get started right away and it did the post mixing for me.

UPDATE 7/19/16! - Zencastr has completely failed me the last 2 interviews I've tried to do. I've moved on to other tools and having some issues with those too (Ringr). Got to get this right as it's a terrible experience for the guest. Okay, back to our regularly scheduled programming...

I've used QuickTime as well to do some intro / outtro recordings (easy when it's just you recording and there's only one mic input).

Get the minimal setup for decent audio and just start recording interviews.

That way you have no excuse for not moving forward, and I believe your audience will be very generous in forgiving you that your audio isn't perfect as long as it's decent and you continue to improve.

The first half-dozen interviews was literally opening up the zencastr app in chrome and pressing record, just letting my macbook mic pick up the voices. And it worked well enough. Not great, but again, just get going.

I have since upgraded my gear. I pretty much copied this tropical mba list on a good portable podcast setup (thank you Evan Leong for the link). It also is pretty much the same setup that Tim Ferriss uses. 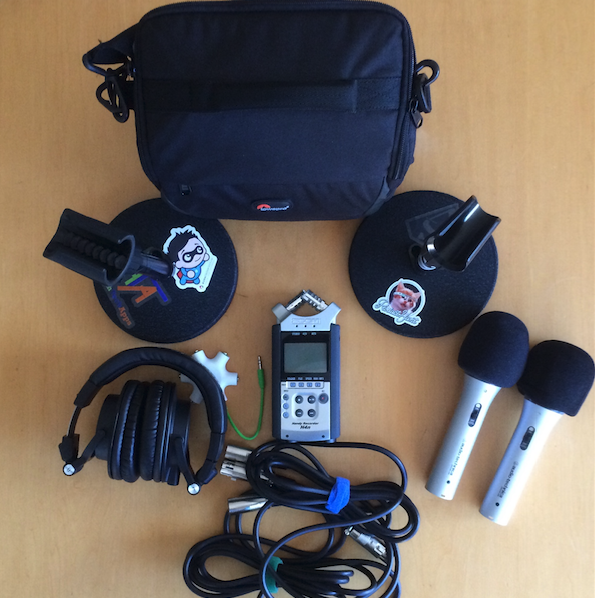 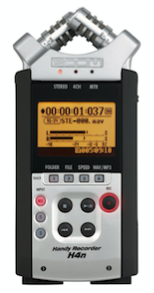 This little guy (all 10 ounces worth) is what makes it all possible.

I chose the H4N because it was significantly cheaper than the latest generation H6N (about $175 on sale). The battery on the H4N apparently lasts a lot longer then the H6N. And the only drawback so far has been that the H4N only takes 2 microphones, where the H6N takes 4. When recording, all audio tracks are synced for easy editing. They're also separated, but for an editing minimalist like me, I don't really care about that.

Dan from Tropical MBA gets into more nitty gritty, so check out his post if you want more info.

You will need a high quality memory card. The supplier I bought the H4N from did not provide a memory card with the device. Note: the H4N cannot accept cards over 32 GB (I learned the hard way).

Audio Splitter. The H4N has one headphone output,and it's good to have a splitter so guests can do sound-check on headphones along with you.

Get a nice pair(s) of headphones. Any noise-cancelling ones of decent quality will work. I went with a sony pair from Wal-Mart that worked okay, until the tiny little battery that you have to put in the headphones crapped out in the middle of a podcast and I felt like I was literally flying blind the entire episode. So yeah, get some good headgear. The ones for the guests don't have to be luxurious, just comfortable and noise-cancelling. The guest headgear isn't mandatory, but it feels cool to have nice headphones on. I also think it gets guests in that mindset of "I'm here to record the best podcast of my life!"

Having good mics is mandatory. I went with these because they're uni-directional, so only pick up sound right in front of them. Note: The ATR 2100's linked to above have XLR Cables that come with them. I didn't realize that and bought cables too.

I also got foam pop guards to soften those pesky "p" sounds and a Low pro bag to help carry the goods (it's snug, but everything fits, minus the mic stands).

So that's the gear. The tropical mba dude says that five years ago, the equivalent technology might easily have cost over 10K and would, most certainly, not have fit in your backpack.

The Editing: Process and Tools

I had mentioned in Part 1 that one of the reasons I chose long form audio was that there would be minimal editing involved.

You pretty much just sit down, press record and talk for an hour.

Then record the intro / outtros of the episode and finally, cut in the music transitions.

The software I've used to do my editing is GarageBand. 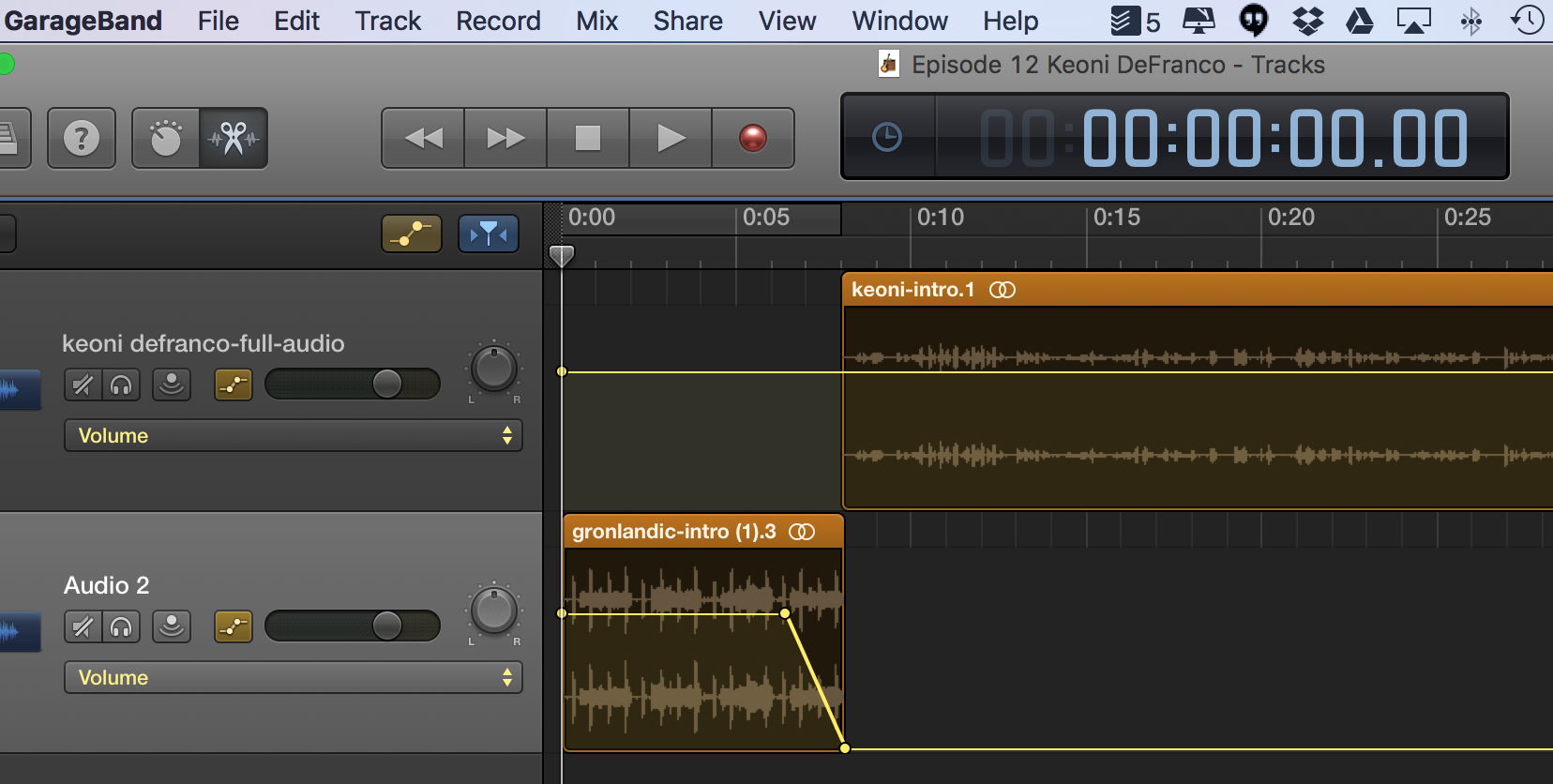 It's great because it's free, and low-frills. You can do the basics with it, and since I'm not doing any heavy lifting with mixing or sound effects, it's perfect.

I started off doing all the editing myself, now I outsource to an intern and had them create the process flow including a checklist and screencast of the step by step process.

When I started out, editing took me about 2-hrs. By episode 4 I got it down to about 1-hr, as long as there wasn't any major editing requirements.

Thankfully, the intern talent we have at SV are awesome, and pretty capable when it comes to media tools like GarageBand and iMovie. Millenials rock!

The Launch: Time to release it into the wild

There's a decent amount of tech and marketing things to consider when getting started.

I chose Soundcloud. Originally because I thought it was free (it was at the beginning), but also because it seemed easy to use.

And it is, I've been pretty happy with it. I like the embed track share code which makes the player look good on our site.

Soundcloud provides some guidance for podcasters using their tools. Probably the most important part is knowing how to get your RSS feed because you'll need that for iTunes or any other podcast catchers (stitcher, etc.)

Setting Up Your Podcast in iTunes

It's a little bit obtuse to do, but overall, not that complicated.

There's a great post on the iTunes partner site on the step-by-step process to get your podcast on iTunes.

For me, I submitted the podcast and never got an "approval" email back, it was essentially just live within 48 hours so if I were you I'd just keep checking it and make sure any new episodes you publish get pushed to iTunes.

I started off just designing some sketches in my moleskine notebook. 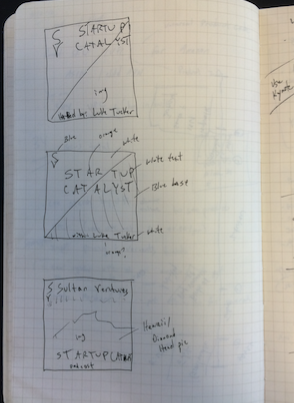 Then did a full mockup using keynote 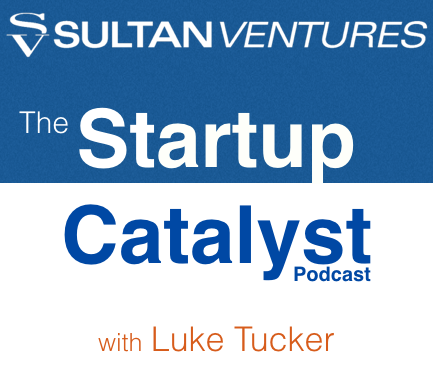 Then I had a team member who's good with design create the high res, final version with a cool photo / graphic (Thanks Lauren!). 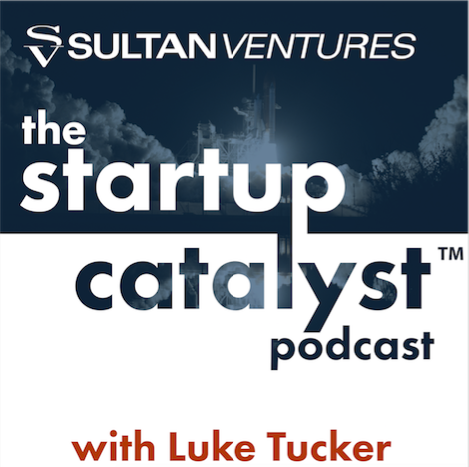 Choosing good podcast artwork is important, as it is the most viewed visual creative piece and it needs to be identifiable and if possible, memorable.

The goal would be to stand out amidst the dozens of other graphics that people see when scrolling through podcasts on iTunes.

The Showrunner guys, have some interesting narrative on this in their Episode 59.

They chose a red graphic because based on their review, they didn't see very many red podcast graphics. So naturally, their's stands out. 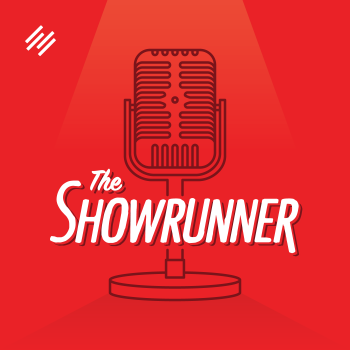 I enlisted a friend who I knew had great taste in music, and a vast library to help me choose some music.

We chatted once or twice, I described what I wanted and he basically came up with the music we use in the podcast within a few days.

The Music Tracks we use are:

With all the above considered, there were still the "crossing of the t's and dotting of the i's to do".

So, in terms of launching and organization, this post helped me, and provided a good checklist / structure to go off of. I also created my own marketing launch checklist: 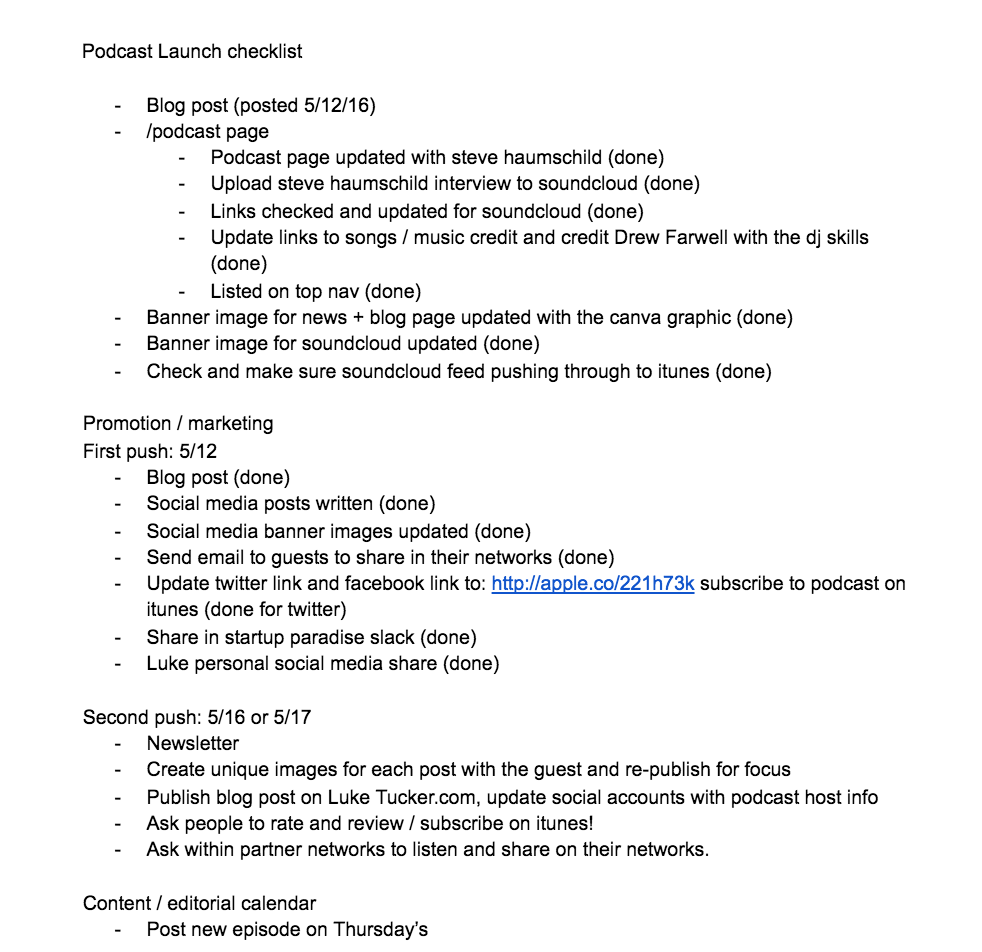 In addition, I also have since created a per episode launch checklist: 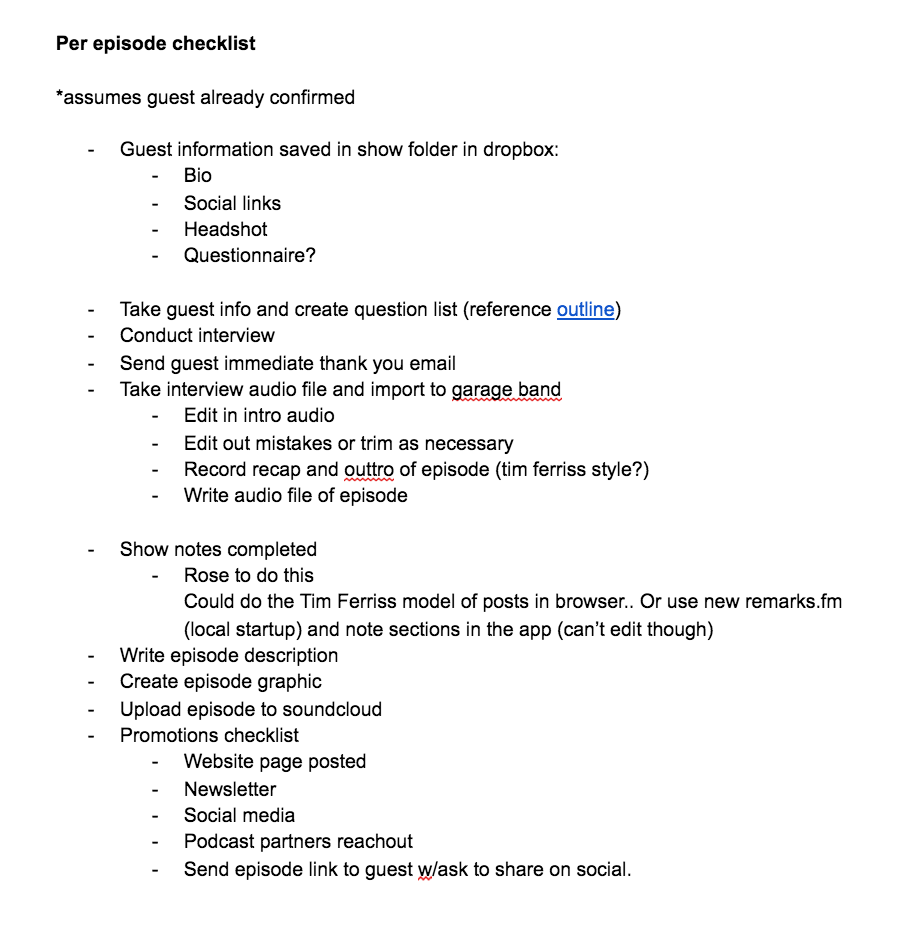 Some Final Launch Tips and Recommendations:

So we officially launched publicly on May 12th, sharing with Facebook and sending a newsletter out later that same week.

Then it was time to sit back briefly and see what people thought, and hope people were going to listen.

Then we must answer the question of how to figure out what and how to analyze it all!

This is Part 2 of a 3-part series where I am writing about the process of researching, creating, launching, analyzing, and promoting The Startup Catalyst™ Podcast.

Next Up is Part 3: The Analytics, The Promotion, The Future

Showrunner: A podcast about podcasts. See the most recent episodes, now turned into a mini course on how to create, launch, and grow a successful podcast show.

Buffer's post: Podcasting for beginners has good insights and info (oddly enough, as much as I love Buffer's content, I didn't find this post until after I launched the podcast).

Special thanks to Evan Leong for his input, guidance, and encouragement.

Of course, special thanks to my colleagues at Sultan Ventures for their support and assistance with this. To Omar and Tarik for seeing and supporting the vision. And shoutout to Lauren, Rose, Quinn, and Jack for all their help - it wouldn't be possible without them. To all my guests, you have my undying gratitude for being on the show!

If you have a story you'd like to tell and you think you'd be a good fit for The Startup Catalyst™ Podcast, hit me up on twitter, @luketucker, or email me: luke[at]luketucker.com.