Of course, a lot went into that launch moment, and much of that I'm going to share with you in this post and the two that will follow.

Since launching, we've welcomed over a dozen guests, launched a bonus episode, and I have been having a blast recording the shows and learning a lot along the way.

This is Part 1 of a 3-part series where I will be writing about the process of researching, creating, launching, analyzing and promoting The Startup Catalyst™ Podcast.

Part 1: The Landscape, The Why, The Concept
Part 2: The Interviews, The Gear, The Editing, The Launch

Part 3: The Analytics, The Promotion, The Future

While the jury is definitely still out on whether we have launched a successful podcast, the show has gotten some good early feedback and reviews on iTunes:

For much more detail on the statistics and progress to date on the podcast, see the post I wrote on SultanVentures.com recapping our first 45-days.

I will say this, I do not measure the "success" of the show by pure downloads alone. As I mentioned, this effort has brand and community benefits that get baked into an overall success calculation.

What to expect in these posts

This series includes step by step analysis, tips of what to do (and not do) and even a few email templates and checklists. Also included are links to helpful resources, and a list of all the tools we use to publish the podcast.

For sure, this is the most ambitious writing endeavor for the blog that I have taken on, clocking in at over 5,000 words in aggregate.

Audio is back like it's 1975, and it's back in a big way. I wanted to kick off the post with some high level trends and statistics to sort of set the stage for what market landscape we are launching our new podcast into.

1 in 5 people in America subscribe to podcasts. That's basically 57 million domestically tuning in to at least one podcast per month. 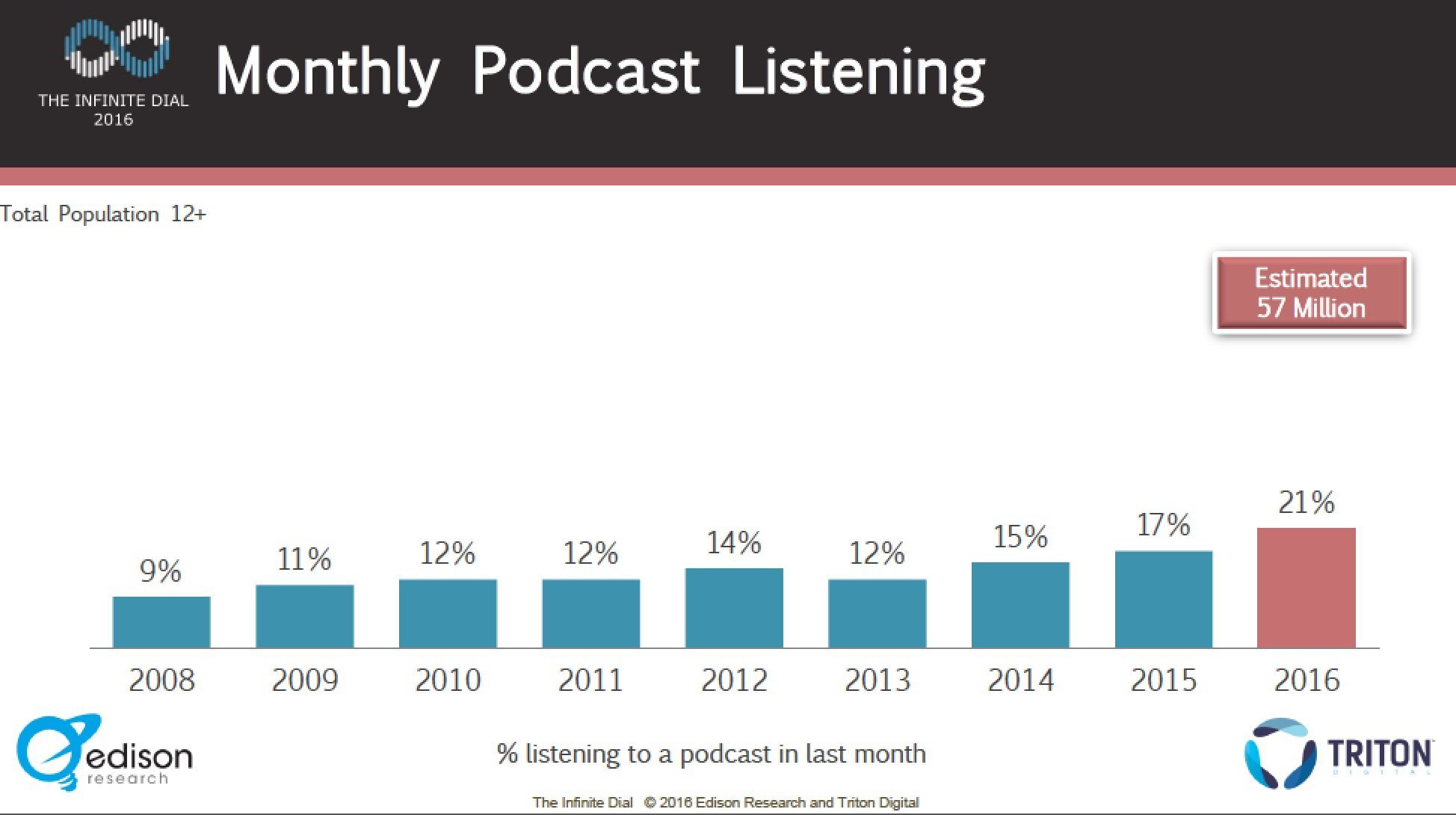 In fact, more Americans listen to podcasts than actively use Twitter on a monthly basis.

The most recent industry trend report I found was an Edison "The Infinite Dial" post. Some key takeaways from that report:

Other industry pundits and tech leaders have recently weighed in on the future of the medium.

For an interesting read on how the best in the biz approaches his podcast: see Tim Ferriss's post "How I launched a #1 podcast with 60M+ downloads".

I posed an interesting question to Google about the difference between Radio and Podcasts. Google didnt say much, but there are some narratives around the differences (I won't get into them here, suffice to say we're going to see more audio innovation and potential "rebranding" of terms). And we'll see more products like Anchor.fm, who profess to be "radio for the people".

Podcasting is still in its infancy I believe and if the data points to anything, it's that people will continue to listen as long as the quality of content is there. With more and more people producing podcasts, discovery, analytics and curation will continue to be key. I expect to see more innovation in the space, which is exciting for podcast listeners and producers.

The Why: After all, Podcasting Aint for the Faint of Heart

I had thought for sometime I wanted to host a podcast show and as many know I'm a big fan of them. Podcasts are a lot of work, make no mistake. But I figured the "juice was worth the squeeze".

Here's my reasons why I thought it made sense:

So I made the decision that I wanted to start a show. Now, what should the show be about?

The Concept: Creating the Concept of the Show

The original premise was simple: Talk to entrepreneurs and investors on the catalysts that led to their startup successes or failures. Do this with an emphasis on Hawaii's startup community.

Here's an image of the original premise google doc that I created outlining the basics as I saw them then: 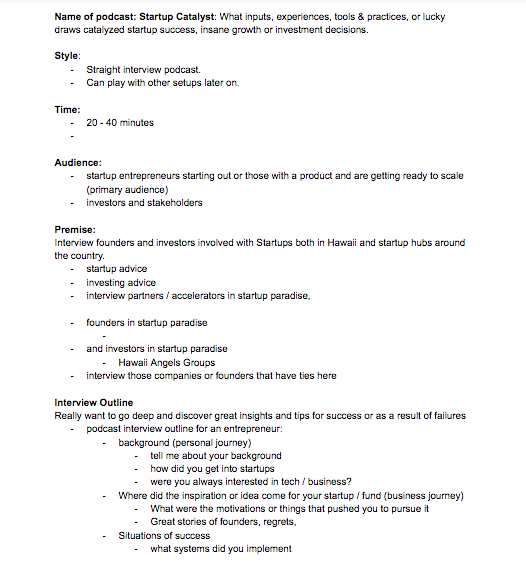 Now, to be sure, some of the things have been refined as we've moved along but in general this outline remains pretty accurate.

A major goal of the podcast that I want to emphasize is this: In Hawaii, people talk about the proverbial "brain drain". I tend to think there are a lot of talented people here, and instead of a story of brain drain, we are showing that Hawaii's talented entrepreneurs and investors can be a source of knowledge that could help people in other communities.

Hawaii as a startup knowledge exporter, so to speak.

As Chenoa mentions in my interview with her, the Startup Paradise community has more brand awareness then people may think. Personally, I have seen and heard of other communities that are where Hawaii was maybe 3 years ago.

As we progress, I see the mission expanding to include helping tell the story of startups that are not in the major tech hubs, emphasizing this "Rise of the Rest" and democratization of entrepreneurship that folks like Village Capital have built a brand and fund around, and even groups like Tech Stars and their "Rising Stars" remote mentorship program. There are some new interviews coming soon which highlight this.

Format
From day 1 the structure of the show was chosen to be Long form interview style. This is for two main reasons:

We also chose to do audio only first, just because doing video is another layer of complexity and I wanted to remove as many barriers of execution risk as possible.

What's The Target Length?
My interviews thus far have been clocking in right around 50 - 55 minutes. Buffer says the ideal length is 22 minutes based upon people's attention span. I do know there's shows that are in that range, hence the brilliance behind the 20 minute VC.

Here's a tip though, listen to podcasts at 2x speed. In the iTunes app, when you're playing an episode, click on the small, horizontal bar at the bottom where the episode is playing and then on the left you can see a "1x". Just tap that a few times and you'll be blazing at mach 2. 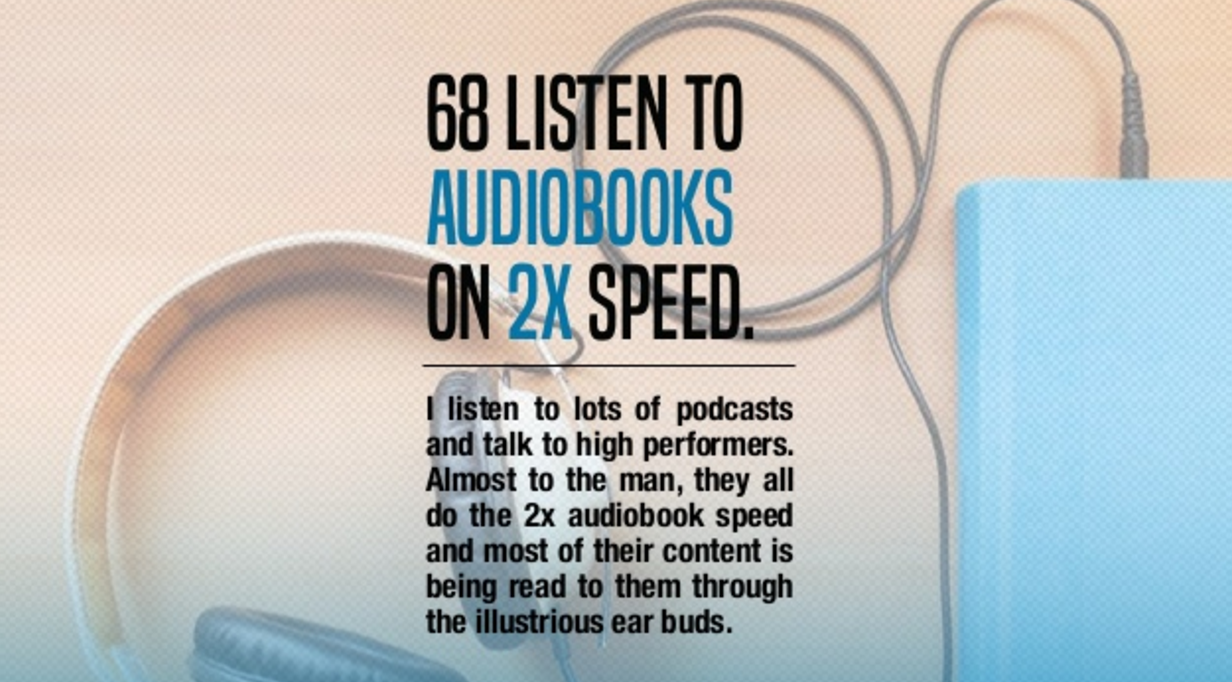 But I wanted to create a podcast that was like many of the ones I was listening too, of which most are long form interviews (James Altucher, Tim Ferriss, Greylock's Blitzscaling). Granted, a few of my non-long form interview format podcasts are the likes of 99% invisible, Gastropod, and Startup Class.

All that being said, we definitely plan on playing with some other formats to keep it fresh and make sure we're still having fun and people are enjoying the comments.

Crafting an idea is truly just the beginning. The next post is the biggest of the three - I write about who I started interviewing and how I convinced them to be on the show, how I approach an interview, what recording gear I use, and more.

Next week I'll post Part 2: The Interviews, The Gear, The Editing, The Launch

Showrunner: A podcast about podcasts. See the most recent episodes, now turned into a mini course on how to create, launch, and grow a successful podcast show.

Buffer's post: Podcasting for beginners has good insights and info (oddly enough, as much as I love Buffer's content, I didn't find this post until after I launched the podcast).

Special thanks to Evan Leong for his input, guidance, and encouragement.

Of course, special thanks to my colleagues at Sultan Ventures for their support and assistance with this. To Omar and Tarik for seeing and supporting the vision. And shoutout to Lauren, Rose, Quinn, and Jack for all their help - it wouldn't be possible without them. To all my guests, you have my undying gratitude for being on the show!

If you have a story you'd like to tell and you think you'd be a good fit for The Startup Catalyst™ Podcast, hit me up on twitter, @luketucker, or email me: luke[at]luketucker.com.