Ninja, Guru, Maven and Douchebag. All mean about the same thing when used in someone's Twitter bio. Now, Growth Hacker seems to be the latest term added to this list. Why is that? And should it be included in that list?

The Urban Dictionary definition of Growth Hacker is:

Now that sounds pretty radical! I would love to be called a growth hacker if that's what it means. But general internet sentiment, hacker news and sub-reddits may malign the term due to overuse, misuse, and abuse. May justice be served.

I'm reading a book now by Chris Goward from Wider Funnel called "You should test that". I put much of that book in the growth hacker category. It basically just seems to me like a lot of common sense. Develop hypothesis, test stuff, measure, improve, replicate. And you can't test as fast or as effectively in a startup if you can't code or at least understand the basics as a founder.

Growth marketing and customer acquisition matter... and it's hard to find people that can do that. - Dave McClure 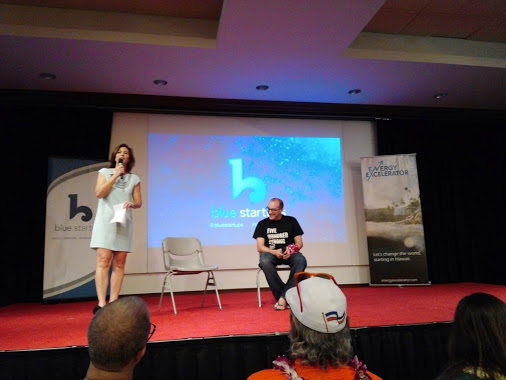 Dave McClure of 500 Startups and Chenoa Farnsworth of Blue Startups at the Hawaii Startup Paradise Demo Day on 8/1/14.

That was the biggest takeaway I had at the time, the prominence Dave placed on the sales, marketing, and growth activities. Having a little more experience now, I realize how right he is.

In the last 4+ years, I've been pitched or have come across many a talented engineer who had the "build it and they will come" mindset. Oh man, that's just not true. What is true is how important product is and building things people actually want.

Because before growth comes product-market fit. Unless you get that right, not much else matters. 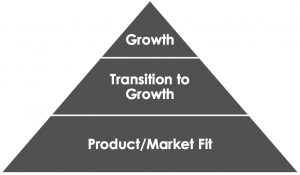 The Startup Pyramid is a Sean Ellis Creation

Startups, by the Paul Graham definition, must be growing enterprises. Good products, with product market fit, and a savvy growth-oriented team will grow like a weed. Paypal was growing 2 - 5% per DAY once they got the growth engine right (thank you eBay). Reid Hoffman said that at one point their queue of customer support emails was growing by a count of 25,000 daily. They had to hire 200 people in the span of 2-months just to stop the bleeding.

So focus is on product first, then growth.

And let's be clear: press is a vanity metric by itself... but tied in with your KPI's or your "One Metric that Matters" then it can be a very relevant and valuable activity.

Growth can be hacked, viable companies can not

That sentence should probably start with "In the short-term..." because you can fake growth. That's one of the reasons why Mark Suster says that companies can raise too much money because they can mask the issues via unsustainable paid growth activities. But sustainable growth is about building a product that solves a pain point, and is for a large (or large enough) set of people. Press and getting mentioned by a celebrity may provide a huge boost in traffic and signups, but your retention curve may look more like a reverse hockey stick graph.

StatusPage.io has a blog post called "The Growth Hacker Movement is Poisonous". Now, I think they're being a little bit of a headline whore with that post title, but it is interesting. Based on their usage of the term, "growth hacks" are short-term in nature and cause temporary increases in user growth and traffic. If that's the case I'd agree with them. When you insidiously growth hack (put gasoline on something when you don't have product-market fit) then you get a graph that looks like Viddy.com's: 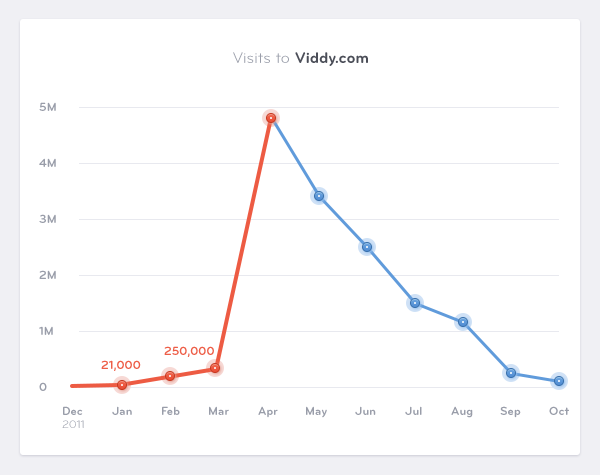 Graph taken from the StatusPage.io article linked to above

I'm a fan of the Growth Hackers community and enjoy the content. Sean Ellis has all the respect in the world from me. (BTW: Read his Blog! Startup-Marketing is a veritable treasure trove of insights and ideas, straight from a the guy who grew Dropbox and coined the term growth hacking) I think these people, many of whom are in growth titled roles at startups, genuinely have the right motivation, approach, and intuition.

I think with any term that reaches a critical mass, once it gets beyond the initial core group of evangelists that championed it, it gets further and further diluted as it continues into the mainstream.

What happens then is the term becomes maligned and caché by anyone who previously may have worn the title with a badge of pride - it actually becomes quite the opposite: a red flag for any legit person who sees the "growth hacking" term in someone's Twitter bio. They are immediately written off and thrown into the same bucket as the social media gurus (aka douchebags).

At the end of the day, who cares what they're called. Digital marketing has always had a strong technical aspect as far as I can tell, there's just a term for that now.

Growth Hacker moniker or not, anyone who knows design, copywriting, user interface, conversion funnels, email marketing, SEO, PR and enough code to be dangerous is a great asset to have on your team.

There's more that could be added to the tool belt of the best growth hacker / digital marketers, such as statistics and excel / google sheet skills. A useful way I've found to display the various topics that require some level of proficiency is the T-graph. This breaks down the skills into fundamental knowledge and gets more specific areas of focus for each layer.

You can see the full google sheet draft of my personal T-graph for digital marketing skills.

On a personal note, I've been checking out several growth marketing courses, and will likely be providing a summary review in a later post. If you've got any favorite resources, do let me know. :)

Andrew Chen published a recent post with the video of his Q&A at Manifesto Conference in a talk titled "Growth is a system, not a bag of tricks". Watch it.

UPDATE: Pinterest product growth lead Casey Winters recently spoke at Launch Incubator and it was featured on TWIST. Watch it, it will be 90-minutes well spent!

On a final note, check out the Startup Class lecture by Facebook VP of Growth, Alex Schultz. He believes that no startup team should have a VP of Growth in the early days... that's all of the founder's jobs. He's right.